Is that the worst pun I have made on here? I fear it might be…

While driving out tour of Iceland, we made a stop at a beach famous for its seals. We arrived really quite early in the morning and were expecting to find the place to ourselves, but sadly several other people, including a tour bus, had the same idea.

Happily however, none of them were equipped with a 300 mm lens! The seals were keeping their distance from the beach, probably quite used to being disturbed by tourists, but the 300 mm allowed me to get in close and capture this particular seal in reasonable detail. He seems to have realised he was now in range, judging by his expression… 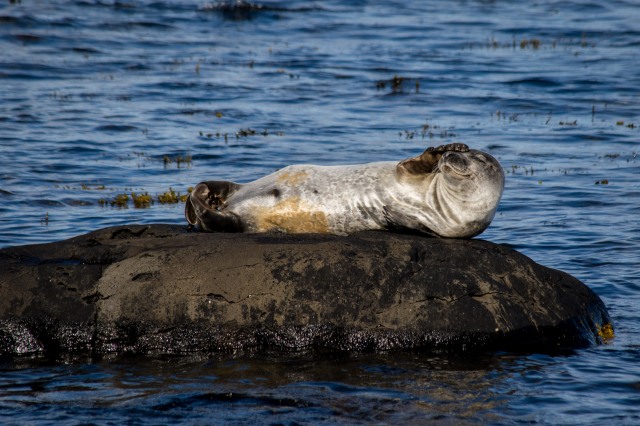 The technical aspects of this image aren’t really very exciting. For photographing wildife scenes like this I usually fall back on the old photo-journalist advice of “f8 and be there”.

This adage is particularly important for my long lenses, because even though they are fast enough to achieve f5.6 at 300 mm (and 500 mm for my biggest lens) I know through experimentation that the images don’t become sharp enough for me until f7.1. I say good enough for me because at faster apertures the images are perfectly sharp for a whole host of applications and it is purely my own preference to shoot a little slower if at all possible. Of course, if the light isn’t there, I shoot faster (by this I mean size of aperture, not shutter speed).

The reason this image works is very simple – the seal is doing something. The lens allowed me to get in tight and crop out the other distractions, but the key to this image was waiting.

So many people just take the first image they see, and they never allow the scene to develop. The wait is the biggest difference between a snapshot, and a photograph.

I don’t know if the seal agrees with me…

You’ve read the blog, why not visit the store? Prints, mounted and framed available here